HOW FAR IS TOO FAR?

Have you ever taken a hike, bike ride or a walk and realized that you had gone too far?

We selected a beautiful trail that began at the ocean near Bodega Bay. The trail was clearly marked and looked like it would be a nice 6 1/2 miles. We parked our car at the trail head and began the steep first mile of the hike. There was quite a bit of huffing and puffing (mostly on my part), as we reached the top of that first mile peak. The trail leveled out after that and we walked along at a nice, easy pace. As we hit the 3 1/2 mile mark, it looked as if we were in the middle of nowhere. We were up very high, not even close to ocean level, and there was dry brush all around us. The coolness of the ocean air was gone, and the sun was hot!

We could see no signs of the trail ending, and there was no where to go but forward. The hours rolled on and eventually the trail turned downward and ended in a cool redwood forest. It was the completion of 6 1/2 miles and we were stuck! I realized in that moment that we had GONE TOO FAR!

Instead of turning around at the half-way point and hiking back to our car. We had GONE TOO FAR, hiked 6 1/2 miles, and found ourselves carless, and having to face the 6 1/2 mile hike back to our car! 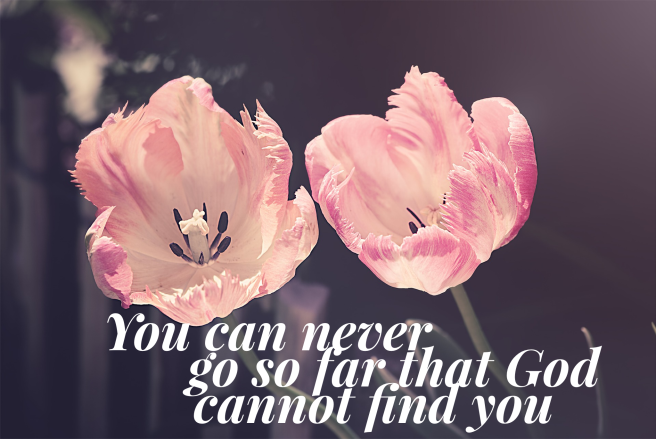 YOU CAN NEVER GO SO FAR THAT GOD CANNOT FIND YOU!

You are never too far from God! You may feel like God is not near. You may struggle to gain or regain that intimate oneness that is possible between you and God. You may even feel that God has “left the building,” but The Truth is, God is near to you if you call out to Him!

If you have called on God and told Him you believe that He is The One True God, and you believe in His One and Only Son Jesus Christ as your personal Lord and Savior, then GOD IS NEAR TO YOU!

Are you struggling to believe that God cares enough to be near to you when you do not necessarily deserve His presence?

Do not let the lie of the enemy penetrate your mind and heart and keep you away from your loving God!

True, our sin did once separate us from God, but when we chose God, He chose us! And, because He is God, He will never leave us. He is always close!

If you have believed the lie of the enemy, and allowed yourself to wander away from God’s presence, DETOX THE LIE! CALL OUT TO HIM! He is close and He will come near to you!

Stay the course. Continue to detox the old lies and replace them with the Truth.

God’s Word is the Truth!