In religious circles, this week is known as ‘Holy Week.’ It is the single most important week in Christendom!

Between Palm Sunday and Easter Sunday, two world changing events happen. Both result in one supernatural phenomenon that bridges the gap between sinful mankind and Holy Perfect God.

The first event happens in Garden of Gethsemane.

Jesus finishes the Passover meal with His 12 disciples. Passover, in the Jewish tradition occurs during the full moon and represents God rescuing His people from slavery in Egypt. Jesus knew that what Isaiah had prophesied some 700 years before, was about to happen!

“But He was pierced for our transgressions, He was crushed for our iniquities; the punishment that brought us peace was on Him, and by His wounds we are healed.”         Isaiah 53:5

So, He called His disciples to follow Him to the Garden of Gethsemane to pray to His Father in Heaven.

He prays with such intensity and such agony that He sweats drop of blood!

“…He became deeply troubled and distressed. He told them, (His disciples), “My soul is crushed with grief to the point of death.” Mark 14:32,33

Jesus then pleads with His heavenly Father to take this “Cup of Suffering” away from Him.

Jesus knows that a horrible fate awaits Him, and He asks His Father to take it away.

What is that horrible fate? Is it the physical death that He is about to endure? True, it is a painful, excruciating death, but I do not believe that is it. Other believers before Him had suffered and died a painful physical death. Physical death alone was not the reason.

Was it the attacks of Satan? Jesus had already endured and confronted and defeated the attacks of Satan in the wilderness. He had fasted, prayed and taken Satan on, and Jesus returned after 40 days strengthened by the Holy Spirit! As hard and difficult as that was, I do not believe that was the reason.

Was it the betrayal of Judas? Judas was a close friend, a disciple, one that Jesus loved and trusted. While this surly brought Jesus pain and disappointment, I do not believe it brought Him, “anguish to the point of death!”

No,  ‘Gethsemane’s Cup’ that Jesus willing drank for you and for me was the pollution of sin mixed with the punishment of sin! It was the vile, ugly, evil sin of all mankind that Jesus took on Himself. It was also the punishment for that sin that Jesus accepted for you and for me! And, ultimately, it was the separation from His Holy perfect Father, as He turned His face away from His son who took our sin on Himself!

The first world changing event is accomplished as Jesus submits His will to the will of the Father and takes on the Sin of all mankind!

THE VICTORY WAS WON IN GETHSEMANE!

A perfect, sinless, willing lamb, was nailed to a cross and put to death for the transgressions of the world.

As the soldiers scourged Him and nailed Him to the cross, Jesus cries out to His Father to forgive them, “Father, forgive them for they do not know what they are doing.”

Seeing all of this and hearing the words of compassion Jesus speaks, a Roman soldier proclaims,

“Surely this man was the Son of God.”

The second greatest world changing event is accomplished when Jesus pays the cost for all of mankind’s sin at Calvary!

The cross was God’s choice. In His wisdom, God decided that the cross was the way to accomplish two great world changing events at the same time: One, Sin is punished, and Two, the sinner is forgiven!

These two world changing events during Holy Week brought us the greatest gift the world has ever or will ever receive! The greatest Supernatural Phenomenon occured bridging the gap forever between sinful man and Holy perfect God, The Resurrection of Jesus Christ!

“You are looking for Jesus the Nazarene, who was crucified. He has risen! He is not here!” Mark 16:6

This week we celebrate the Holy week of Jesus. Thursday night as He prayed and committed His will to the will of the Father, Friday as they scourged, beat Him and nailed Him to a cross, and finally Sunday when God raised Him from the dead! 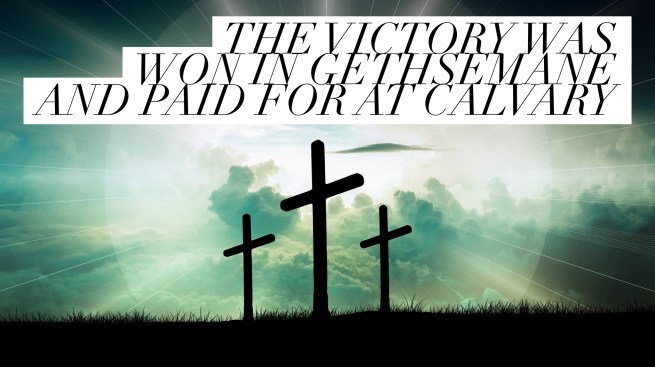 THE VICTORY WAS WON IN GETHSEMANE AND PAID FOR AT CALVARY.

He lives my friends! Jesus is alive!

HALLELUJAH! WHAT A SAVIOR!

One thought on “HOLY, HOLY, HOLY”