IT’S NOVEMBER! Yes, we’re still in November and we are giving thanks. I am thanking God today for the one thing in my life that I am most thankful for.

Today, November 13th, I am thanking God for going after me! In this crazy, busy, mixed up life, My God goes after me!

In this story Jesus told, He is using something near and dear to our hearts, to express His truth to us. He’s telling us that we are so valuable to Him that He will leave everything and everyone to go after us and bring us back to Himself!

When my son was 4 years old, we were on a family vacation in Lake Tahoe, our favorite family vacation spot. We were staying on the Lake that year and were there with my entire extended family. The guys had gone off to play tennis at the courts on the property and the girls had stayed behind in the cabin doing what we girls do best, talking, laughing, sharing and drinking coffee!

There were three small boys in the family at the time and they had all wanted to go to the tennis courts with the “big guys.” My husband said it would be fine, that the courts were fenced in and they could “collect the tennis balls” for them.

It had been about an hour after they left that I got a sick feeling in my gut! I jumped up from the chair and ran to the courts. My son was no where to be found. The guys were still playing tennis, the other two boys were collecting the tennis balls but my son was GONE!

I cannot begin to express the feeling of panic that ran through my body! We started running up and down the entire length of the Lake front, looking for our little boy. That Lake is long, and there was not one second that I thought about being tired, I could only think about finding my lost boy! We had literally run the entire length of the Lake when I came to the dock at the far end. I fell to my knees in the sand, and begged my God to bring my boy back to me!  I stood up and began walking back down the Lakes edge, where I had just come from. In the far distance I saw a dog walking beside a man, holding a little boys hand. I ran like I had never run before. Before I got to them the man let go of the littles boys hand, and my son slowly and calmly walked to me. He had such a peace about him. He was not frightened, alarmed or nervous in any way. I grabbed him and wrapped my arms around him and asked him where he went. He calmly replied, “I was picking up the tennis balls and one rolled outside the gate. I saw the ducks by the Lake and started chasing them. Then a nice man took my hand and brought me back to you.”

You can think what you want, and believe that it was truly a “nice man” who found my lost boy and brought him back to me. But I know it was God! He left everything and everyone else to answer my prayer, find my boy and bring him back to me. Tyler was too young at the time to know where our cabin was. He had gone so far down the Lake that there would have been no way for him to find his way back on his own. God went after my boy that day, and God goes after us each and every day that we wander away from Him.

God uses this story of a shepherd going after his sheep, so that we can understand that when He calls Himself, ‘The Good Shepherd’, He will come after us, his sheep, when we wander.

We are God’s precious lambs. He loves us, gave His life for us, seeks us, and goes after us each and every time we wander away. 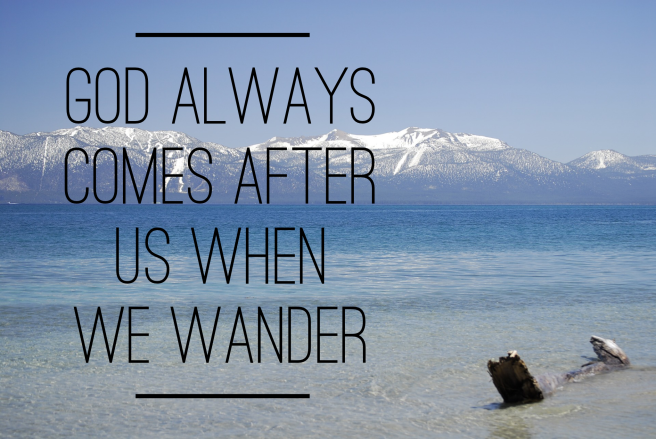 GOD ALWAYS COMES AFTER US WHEN WE WANDER.

We are almost at the half way point of November. I pray that you are using each day to give thanks to the One who goes after us, no matter the cost!

Have a great week friends!